The colorful sticks are often referred to as Japanese Candlesticks. When grouped together, you get Candlestick Patterns!

The Japanese candlestick is the purest visualization of all market participants trading any particular asset - be it stocks, bonds and even cryptocurrency trading.

Honestly? It may be the most powerful foundational concept you learn.

Afterall, the study of candlestick patterns is a key component of the foundations of technical analysis. All the complex, intimidating, "white-collar-ugly-tie" concepts are built on top of this really.

Well, you didn't hit this world running, now did you?

You first cried, crawled, and then walked. Learning to analzye Candlestick patterns is much like crawling. It's the first foundational lesson in technical analysis.

Chart Patterns at first glance can appear to be daunting - the red makes a lot of people whine, and cry. But...

Ready to jump in?

If the answer is "YES", well, I'm afraid we'll have to eat our veggies before we get to the steak.

The colours of course! duh!

Those aren't just there to make your chart look pretty. Those colours add more information to the candlestick patterns.

What information, you ask?

Similarly, in the the world of trading, the color Green is also a positive - It means "UP". When price moves up (positive) the candle is Green, and when it when price moves down (negative), its Red. Unlike line charts, which is pretty much a line depicting the price moves, Japanese candlestick charts will tell you who won the fight between the Bulls and the Bears.

This will give you a better read on the trend, which will also help you weed out false signals. Like a bull trap, and a bear trap.

How to read a Japanese Candlestick?

A rough drawing resembling that of a single "Candlestick" was first used by a Japaenese rice trader named Munehisa Homma a very long time ago. He used the visual aspect of a candlestick to record the price fluctutaion of rice within a specific timeframe.

For example: Let's say Mr. Homma was recording the price of rice for 1 Week using a Japanese Candlestick, it would look something like this: So if you've heard the terms "Japanese chart patterns" or " Japanese candlestick patterns", know that they're all the same thing. The use of "Japanese" is primarily in due respect of the founder, Mr. Homma.

Lets be honest though, if Homma was born of this age, the mundane "Japanese Candlestick" would've been the "Japanese Dynamite" - which would've sounded way cooler.

Another common question beginners like to ask about candlestick charts is:

How many candlesticks does it take to make a pattern?

Ultimately, its all about trading psychology.

Which means that along with price, each candlestick is also a representation of human emotions - Fear, Despair, Joy, Irrationality, Exuberance etc.

Cool! Now lets get to the fun part! phew!

How many candlestick patterns are there?

Around 80-100 known candlestick patterns have been identified.

Don't worry, we won't be going over all. Just the important ones you ought to know of.

The important candlestick patterns are the ones that signal a trend reversal.

If you just want to cut to the chase, you'll find the index on the right-hand-side. :)

The bullish hammer doji looks much like a hammer, and depictics aggressive buying activity in a period previously dominated by bears.

A bullish engulfing pattern consists of 2 candlesticks where the buyers undo a previous sell-off and then some.

the tweezer bottom Pattern consists of 2 candlesticks where in sellers aren't willing to sell at a price lower than first low.

The bullish morningstar doji is an indecision candle in an established downtrend. Noramally marks a reversal point.

A 3-candlestick bullish pattern depicted by 3 green bullish candles. Each closing higher than the previous one 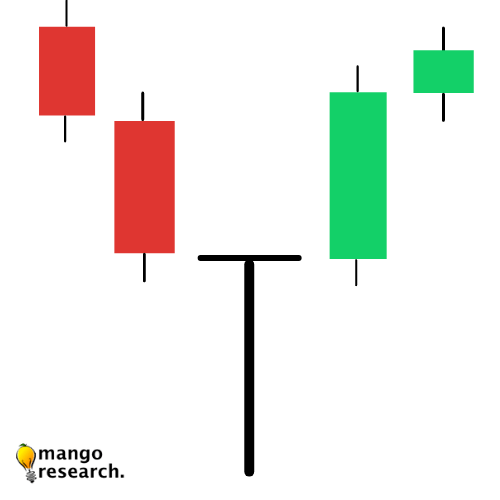 The Bullish Dragonfly Doji is represented by the long wick/shadow at the bottom. This tells us that while bears sold enough to push price down to a new low, the buyers stepped-in to a point where price was back up where it started.

In a prevailing downtrend where sellers dwarf buyers, the Bullish Dragonfly doji pattern is the first sign of market equilibrium.

You'll find that it's most effective as a reversal signal in established downtrends. 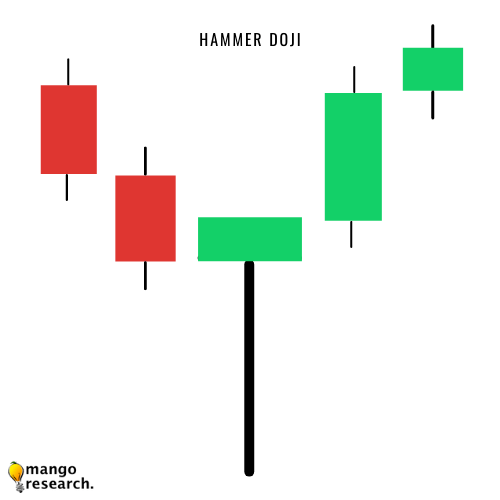 The Bullish Hammer candlestick is represented by the long wick/shadow at the bottom, followed by a green body at the top.

This tells us that while bears sold enough to push price down to a new low, the buyers stepped-in to overpower the sell-off, to a point where price closes higher than where it started.

In a prevailing bearish downtrend where sellers dwarf buyers, the Bullish Hammer candlestick pattern is the first sign of sellers getting exhausted, and buyers gaining momentum. 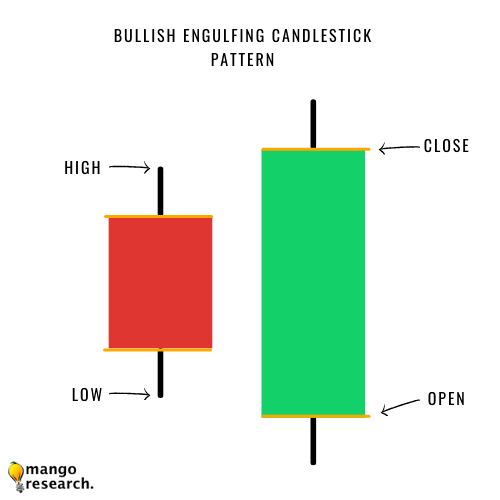 The Bullish engulfing candlestick pattern has a minimum of 2 candlesticks, and is most telling & effective at market bottoms.

A bullish engulfing pattern is only valid if the bearish candlestick fits within the body of the bullish candlestick - this includes the wick high & wick low.

This tells us that while bears sold enough to push price down to a new close low, the buyers step-in to not only take out the previous open, but also the wick high. This show's immense demand from the buyers.

In a prevailing bearish downtrend, a bullish engulfing pattern not only shows strong buyer interest pouring in. 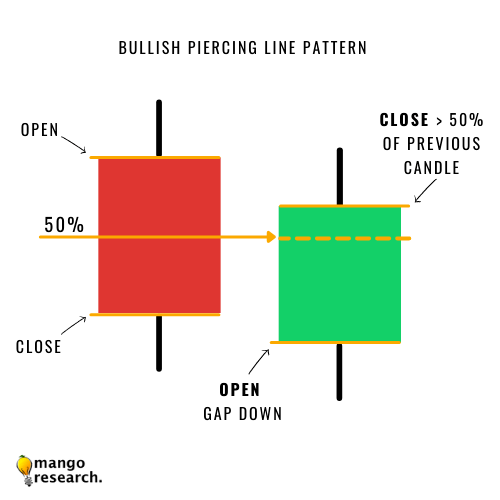 The Bullish Piercing Line candlestick pattern has a minimum of 2 candlesticks, and is a show of bullish momentum taking over amongst high seller expectations.

It's most effective as a bullish trend continuation pattern. This is especially true when price is range bound on a local top, and either side can take over.

The piercing line pattern is represented by 2 candlesticks wherein the the 2nd bullish candlestick (buyers) opens gap down, and ticks up to cover more than 50% of the 1st bearish candlestick.

In 24-hr markets, like the crypto market, it would be appropriate to look for a considerable lower wick low on the 2nd green candlestick. This would show high seller expectation, only for buy pressure to come swinging in. 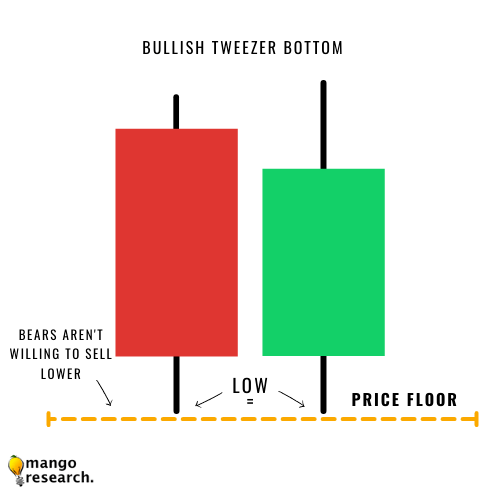 The tweezer bottom candlstick pattern is a bullish reversal pattern. This candlestick pattern has a minimum of 2 candlesticks, and is a show of waning sell pressure from the bears.

The tweezer bottom pattern is most effective when spotted in an overarching downtrend. Since it reveals strong price support being hit.

The tweezer bottom pattern is represented by 2 candlesticks wherein both candlestick wick Low's are around the same price. This marks a "floor price" at which bears aren't willing to sell past, signalling a temporary trend reversal. 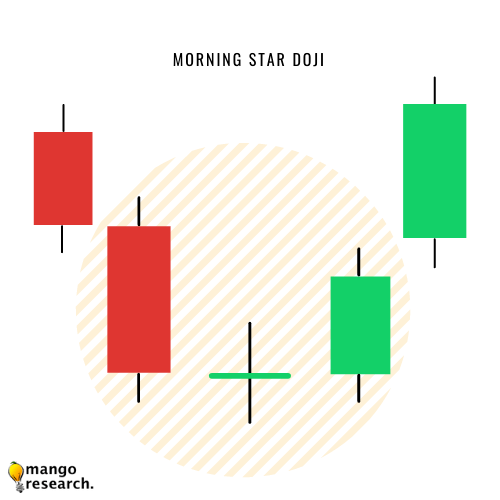 The Morning star doji pattern is usually a sign of a bullish reversal. This candlestick pattern has a minimum of 3 candlesticks, and is a show of indecision in a prevailing downtrend.

The point of indecision being marked out by a doji candlestick. During this phase, the bears show signs of hesistance in selling at lower prices.

Like other popular bullish reversal patterns, the Morning star Doji is also most effective when found on established downtrends. 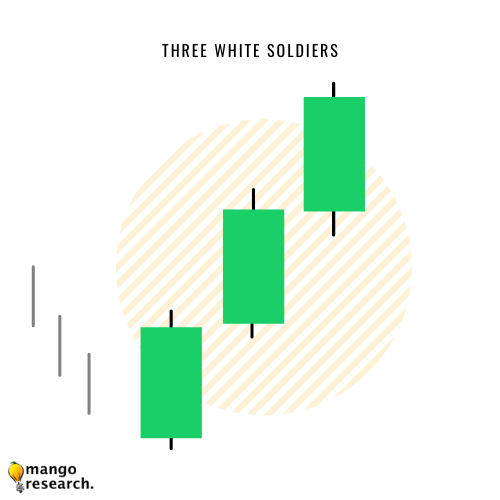 The three white soldiers pattern is often found on many japanese candlestick guides. It consists of 3 back-to-back bullish candlesticks with long bodies.

The three white soldiers are best found in established intermediate or major downtrends, as it marks waning bearish momentum. The sell-side temporarily dries out, allowing bulls to buy up the asset.

This is depicted through 3 consecutive bullish japanese candlesticks. Which could be the impetus to a bullish trend reversal.

Work of caution: The thing about soldiers (like teams) is that they're only as strong as their weakest link. When three white soldiers find themselves battling strong resistance, pay heed to who wins. Because that may just be the determining factor on a bullish reversal, or price rejection leading to a bearish continuation .

The Best Time to Start is NOW!

All you gotta do is take the decision to START NOW, and you'll be joining this happy, very Mango, stress-free lot of people!

Yes! Trading can be stress-free, and we'll teach you HOW through carefully curated, highly engaging trading modules & exercises.